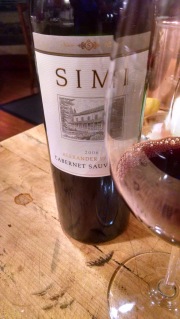 Black, thick garnet with amber edges.  Cloudy with sed, and entire shoulder coated even though upright since release to store and then horizontal in my cellar for some time.  Weird.  You still run into these from time to time–mostly in older liquor stores now owned by Middle-Easterners who typically do not ever run air-conditioner.  I can tell by the price tags where I bought these, and this one his one from questionable provenance–one of those such stores which probably see a few 90-degree days in the summer.  It is considerably further along than other 2006 SIMI Alex’s I have.  Still has the huge minty, Tootsie-Roll, Euro-Tart bouquet heady with rich fruit and polishing oak and spice.  Taste, likewise, rich and supple with the fruit heading a most-magnificent direction of worn saddle-leather, Christmas-spices and absolutely the most wonderful tannin curling in to carry the forever-finish.  These are just stunning wines for the money.  All the way up through 2009.  I feel something changed in the 2010, and can not endorse it.  I own a fairly deep vertical 2005 through 2009 and try desperately to keep my hands off them.  The 08’s and 09’s are still fairly common in retailers–buy them up.  They make an handsome addition to any cellar and will please for years.  This one…. I just feel has suffered a tiny bit from bad temperatures based on, well, PRIMARILY from drinking other 06’s, which were vibrant and full of life (as they should be at only 8 years old), but mostly the colour.  The colour screams of age, and there is a *teensy* bit of maderization–a slight ‘portiness’ in the entry and middle which I have not found in these before.  Motto of the story:  WATCH YOUR STORAGE.  This is still a fabulous little wine and I am not discounting it all… just interesting to see the difference between stores I have purchased them.  Just can not get behind the SIMI’s enough.

One thought on “Supermarket Wine From the Cellar”