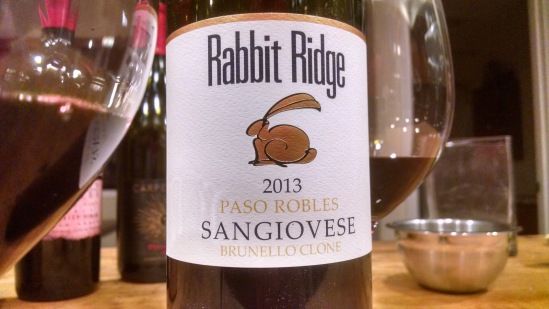 Bright clear ruby with pink edges.  A fairly shocking vanilla toast, herb and whisky nose with healthy wet asphalt and some of the deepest, darkest, richest plum-fruit I have ever smelled in a Sangiovese this side of something Super-imposed with Cabernet or Merlot.  Daniel Gehrs makes a Sang somewhat like this in Santa Barbara County–definitely not as ripe, though.

This wine was a gift, and I was chuckling a bit as I opened it with some comfort food on a weeknight… I mean–come ON!  It’s Rabbit Ridge ferchrissakes!  Opened it, smelled it and was immediately impressed.  Even more-so after tasting.

Fairly fat initially, but soon overwhelms the mouth, blossoming into piles of ripe, flowery fruit–think Gardenia and cheesecake with Comstock filling on top–and bitter, brier-driven tannins.  A fair amount of heat in the finish.  I think this thing’s over 15, but it carries it SO well.  My opinion formed, I visited their website and found it to not be exactly one of their entry-level wines.  I had no idea they had anything other.  This will blow you away, it’s THAT good.