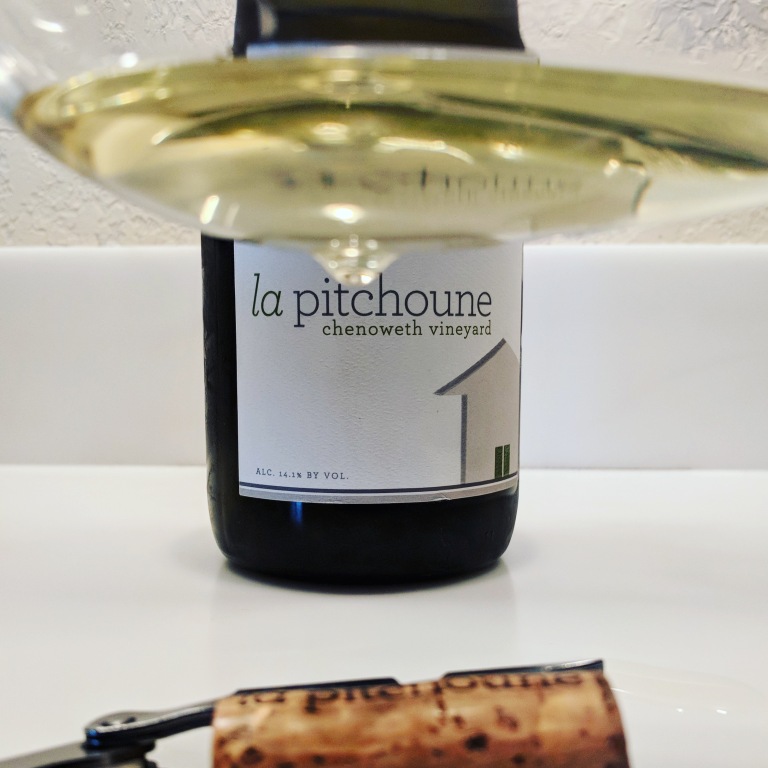 This one starts off with a golden glow–visually AND in the nose. A little smokey natal plum and gardenia tempered with equally sultry notes of banana ripe cantaloupe. A briary bitter pops up in the background, informing all this is indeed another La Pitchoune beauty and not supermarket Karo syrup.

All across the board, the loveliness that IS pure Chardonnay expresses itself–a beautiful, natural nuance which can not–wait, let me re-phrase that–SHOULD not be distilled out at either end of the spectrum: shrill, hollow SS versions which capitalize on the uninformed public armchair-quarterbacking assumed profile aversions or fat oak infusions which are popular to hate but still sell in record numbers to people equally mis-informed and poorly-palated. I actually respect the latter group more. At least they don’t let platitudes will their drinking habits.

In the mouth, (57°F, yes, that is literally TWENTY DEGREES warmer than Chardonnay served in a restaurant) crisp beautiful fruit running grassy and vanilla-bitter follows a stream of rich Thompson Seedless and apple pie topped with cream cheese. The acidic bite comes early on this one, but down around 50° it is merely velvet sandpaper running towards a tannic finish.

My love for this label is well documented (https://soifknows.com/?s=la+pitchoune), and this is ANOTHER in a long line of ridiculous beauties which practically leave you speechless.